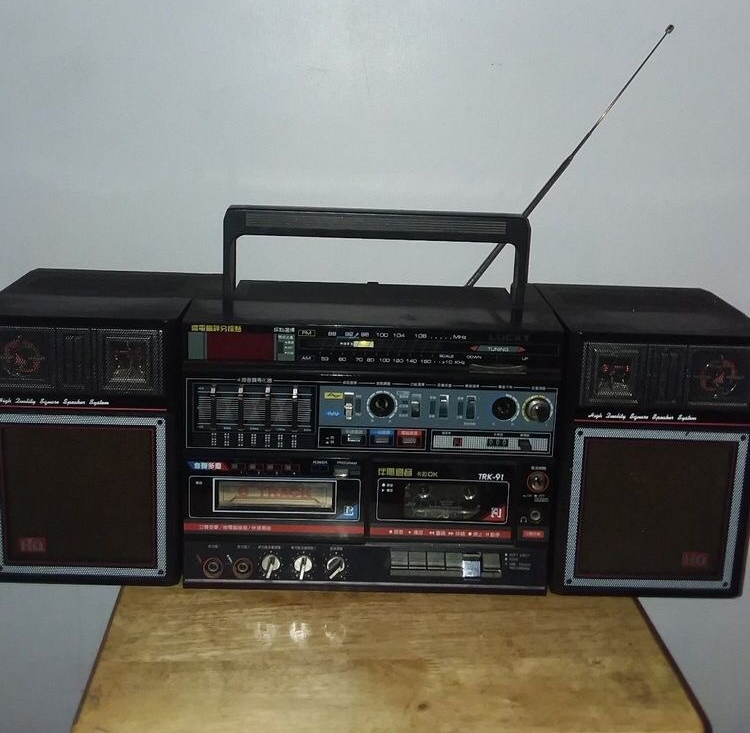 The past two week period started off really slow, and I was struggling to find enough interesting new music to be able to review. Then, as it got closer to the end of the two week window, I came across enough new music to complete this and the next post. In this one, I check out the latest Angelique Kidjo project, the new album from Cage the Elephant, a compilation of sorts from Norah Jones, and the latest from The Budos Band.

This post features an image of an item that was once for sale on Ebay – a boombox with an AM/FM radio, cassette deck AND an 8-track player! Never seen one of those before…… I am completely stoked and ready for some new music from my FAVORITE band from the 90’s, The Brand New Heavies, and they have just delivered a new track called “Getaway“; the best part is that it reunites them once again with their most well-known lead singer, N’dea Davenport. The official group is now just the duo of guitarist Simon Bartholomew and bassist Andrew Levy; founding member and drummer Jan Kincaid, along with their last full time lead vocalist Dawn Joseph, left after their 2014 Sweet Freaks album. A new album is also on the way, and it will be great to have them back – just in time for summer… here’s the track…

This album is simply one national treasure covering the music of another- Kidjo, herself a legend in Juju and Afrobeat, covering songs of the Salsa queen Celia Cruz. This release follows her last project, released last year, where she covered the Talking Heads seminal 1980 album Remain In Light.

Kidjo has fancied herself as a teacher- as the story goes, her parents wanted her to be a teacher, but she wanted to study music; now, she teaches through her music. On this album, she connects and traces the music of Celia Cruz back to its’ African roots. The album is not done in Salsa, but she has reinterpreted it into an Afrobeat style; the results are not radically different from the originals, which just illustrates the similarities in the styles (which is the point of it all), but they aren’t quite the same, either. Kidjo covers a wide swath of Cruz’ career output, from tunes she recorded with La Sonora Metancera before she left Cuba (because of the Castro regime) in 1960, to tunes she collaborated with Tito Puente, the Fania All Stars and others, to the 1998 track “La Vida Es Un Carnaval“, her last big hit. Several of her best known hits are here, including “Cucala“, “Toro Mata” and “Quimbara“, along with nods to Santeria on “Yemaya” and “Elegua“. Along for the ride as her backing musicians include Fela Kuti’s longtime drummer and musical director Tony Allen, and Meshell N’degeocello on bass, among others.

Cruz passed away in 2003, but her prodigious body of music lives on; in the capable hands of Kidjo, her songs are again revived, with a little different spin. This is a wonderful collection… I wonder where Kidjo will turn next for inspiration…. Here is a video of her performing “Cucala“…

The fifth album from this band, originally formed over a decade ago in Bowling Green, KY, but based in the UK, continues to diversify their sound, to the chagrin of some of their fans; it follows up their 2015 Grammy winning album Tell Me I’m Pretty.

The subject matter throughout the album appears to focus on the effects of a divorce from his wife experienced by frontman Matt Shultz, a well as dealing with the anxieties of being rockstars. The first single from the album, “Ready to Let Go” appears to be an acknowledgment on his part of the end of his marriage to his wife; the track is built on a mid-tempo beat with buzzing guitars, and also has a bit of a strange video to accompany it, as you’ll see below. Beck features on the reggae-influenced “Night Running“, while the classic Punk feel of the set opener “Broken Boy” discusses someone uncomfortable as they were created, both physically and socially. Much of the rest centers on the aforementioned subject of divorce- “What I’m Becoming” talks about the couple growing apart, “The War Is Over” brings the heart-wrangling to a conclusion, and he finally makes peace with the fact their marriage is history, and “Goodbye” is simply that, an ode to his wife. The quirky New Wave-ish title track, the rockin’ doom of “House of Glass“, and the mildly bluesy “Dance Dance” all address the anxieties of stardom and living the fast life. “Love’s the Only Way” seems to somewhat bridge these two subjects, and uses an acoustic guitar foundation with orchestral backdrop.

With this latest album, Cage the Elephant puts its’ emotions on full display – when you go through the life turmoil Shultz has gone through, you get all kinds of musical textures relating to the changing emotions. Fans concerned they’re changing for the worse needn’t worry much, they’re just adding more to the arsenal of an already interesting band. Having listened to Tell Me I’m Pretty, I hear Classic Rock and some Blues (thanks to producer Dan Auerbach); if that’s all you want, you’re stunting their growth. They show with Social Cues they can do more, and do it well… Here’s the video for “Ready to Let Go“…

The seventh album from 40 year old Jones is not an album, per se- it is a collection of seven one-off singles she recorded with different musicians over the past couple of years. Clocking in at just 29 minutes, the tracks show the stylistic diversity she’s displayed throughout her near two decade solo career.

Begin Again kicks off with the hauntingly sparse “My Heart is Full“, a song that addresses divisions in our relationships with each other from a societal viewpoint, and the will to rise above its’ ills; “Begin Again” appears to address a relationship coming apart, until she lets us in on its’ primary focus in the last verse…”Can a nation built on blood / Find its way out of the mud? / Will the people at the top / Lose their way enough to stop?”… The tracks “It Was You” and “Wintertime” are those front porch country-tinged jazzy ballads for which I so love Norah, while “A Song with No Name” is a folky ballad that blithely expresses a longing for someone. “Uh Oh” is a playful pop number, while the closing track is a defiant little jazzy number “Just A Little Bit“.

After the first couple of listens to this album, I was a little miffed, thought Norah had mis-stepped with this one; however, after reading about how this project came to be, the lack of cohesion made much more sense. You see the different angles Norah presents, and now it reinforces what I’ve always felt about her – she’s a creative force that refuses to confine herself to a single box. And if you know me, then you know I like that kind of thinking… Check out the lyric video for “Begin Again“…

The newest album from this Brooklyn-based nonet (that’s nine members) strays a little farther from their original roots as an instrumental groove band whose sound was rooted in Afrobeat, Soul, and Jazz; their sound is evolving into a kind of a psychedelic Jazz/Rock hybrid, a trend started with their last album, 2014’s Burnt Offering. Recording for the NYC label Daptone Records (home to the late Sharon Jones), this is their first album in five years, and is their fifth album, hence the title “V”.

There is an inherent danger with making an all instrumental album, and that is, quite simply, you have to make the music arrangements interesting; some people need some singing somewhere in the mix, others don’t. The evolution of their sound, to my ears, recalls late 60’s Jazz/Rock typified by the Ides of March or very early Chicago (when they were known as the Chicago Transit Authority) – I love early Chicago, but they also had vocalists that added to the overall sound. The Budos Band tries very hard, often too hard, to compensate for the lack of any vocals in their tunes by mixing up the motifs and riffs during the tracks. Since much of this is driven by the horns, and increasingly by guitars, it sometimes sounds like a mixed bag of stuff, to mixed effectiveness. “Spider Web, Pt.1” gives you a Zeppelin-esque guitar riff, and is probably the best example, along with “Old Engine Oil” and “Arcane Rambler” of what they’re trying to do these days. Much of the rest could be soundtracks for old cop shows.

For me, I was expecting more from this album; maybe I do need some vocals, here… Most of the time, when I’ve listened to them, it was in a mix or playlist with other artist’s tracks- they’re really pretty cool taken a song or two at a time; as a whole project, though, this just didn’t hold my interest- I like the old Budos sound better…. no videos are available for this album, here is an audio clip of “Spider Web, Pt. 1“…