Between full-blown issues is this special issue, where I review the debut album from Cardi B, a mini-epic from The Weeknd, and another debut, from Alina Baraz… let’s go!

I’m gonna just cut to the chase here and tell you that this album is better than I thought it was gonna be………. now…….. having said that, if you know me and you’ve read other reviews of mine, you may also know that I had verrrry loowww expectations for it, as well.  I don’t generally like much of today’s rap/hip hop, but an album that has garnered all the hype, acclaim, chart success, and awards that it has, I had to check it out.  And besides, good music is good music, right?

So….. this won’t be a song by song breakdown of the 13 tracks here; I can sorta categorize them all into three of four different buckets: for me, the tracks that worked best actually had less Cardi B. in them, and more of whomever was featured with her in the track… this is, in and of itself, a departure for me, since I, for the most part, hate the “featured” artist concept- it has replaced the ‘group’ concept…. And this is not so much a diss of Cardi, but a recognition that several of the tracks that feature more than just her are actually songs – compositions with a song structure – “Best Life” feat. Chance the Rapper, “Ring” feat. Kehlani, “I Do” feat SZA, and a track sampling the Pete Rodriguez Latin classic “I Like It” feat Bad Bunny & J Balvin would all fall into this category…. Some others, notably the collabos with Migos (“Drip”) and YG (“She Bad”), didn’t work for me.  Cardi shows a bit of a vulnerable side all by herself in “Be Careful” and “Thru Your Phone”… and then there is the side of her we all know best, the Cardi B of “Bodak Yellow”, “Money Bag”, “Bartier Cardi”, “Bickenhead”, and the album opener “Get Up 10”, all of which she rants and spits venom at her haters over a minimal Trap beat.  I did get to hear between the ranting, of her story of rags to riches, her ascendance in the rap game and all; this is where I suppose some folks find some inspiration from her.  Supposedly, she worked hard to conceal that thick New York accent she has while recording the album, but she failed pretty miserably at it- I hear it throughout, and hate it.

This will be the one everyone talks about throughout 2018; I would love to be able to pull for Cardi B. to continue to be the success she has already become overnight, but after listening to many of the tracks here, and watching her Grammy acceptance speech, I’ve determined she’s not a really likeable person at this point in the game.  Right now, she’s got something to prove, and many people to whom she offers a middle finger and her ass to kiss.  I’d most likely be considered a hater, too… and I’m fine with that… while listening to the album, my wife, who was in the room with me, claimed I was committing spousal abuse for having her listen to it… it’s not THAT bad, but………. here’s the audio for “I Like It”… one of the few tracks I can get with…

The Weeknd “My Dear Melancholy,” 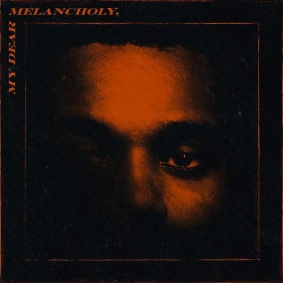 This surprise release is a welcome return, for many of brother Abel’s fans, to a style reminiscent of his “Trilogy” and “Kiss Land” periods; in contrast to the much more commercial and hugely successful “Starboy” album, this brief 21 minute set of six new tracks heads back towards the deep emotional abyss where we first found him.

The set seems focused on his inability to distance himself from past relationships, including his two failed high-profile pairings with Selena Gomez and Bella Hadid.  On the opening track ‘Call Out My Name’, he asks “I want you to stay even though you don’t want me / Girl, why can’t you wait? (why can’t you wait, baby?) / Girl, why can’t you wait ’til I fall out of love?”… on “Try Me”, he tries to convince a former lover to ditch her current boo and come back to him… “Wasted Time” seems to put his failed soirees into perspective, but he also seems ready to waste more time, cuz he just can’t quite let go… “I Was Never There” speaks of the emotional numbness he resorts to, by way of drugs and alcohol, in order to cope with a breakup: “Ooh, now I know what love is / And I know it ain’t you for sure / You’d rather something toxic / So, I poison myself again, again / ‘Til I feel nothing in my soul (in my soul) / I’m on the edge of something breaking / I feel my mind is slowly fadin’”… on “Hurt You” he tries to warn a former lover not to get involved with him: “And now I know relationship’s my enemy / So stay away from me / I’m warning you…” and then the closer “Privilege” seems to hint of his resignation that a relationship’s reached its’ end, and again how plans to cope with it (drugs, alcohol, casual sex).

Two of the tracks feature the production work of German Gothman Gesaffelstein, to add to all this emotional drama, and the comma at the end of the EP’s title suggests there is perhaps more of this to come.  Having been a Goth guy of the 80’s, I prefer this Weeknd, tortured, anguished and all lyrically, and cinematically dramatic musically, over the “Starboy”; I do hope he finds the glimmer of hope in love to lighten up a lil’ bit, though…  Here’s the video for “Call Out My Name”…

Alina Baraz “The Color of You” 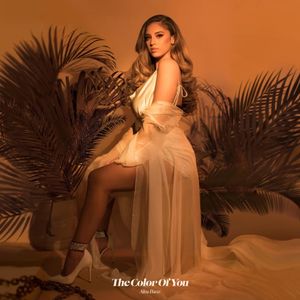 This new album is relatively brief, giving us nine tracks over just 31  minutes, and is missing a couple of earlier singles released ahead of it – “Lavender” and “Buzzin’” – and is missing the production work of Galimatias, but is still a simmering mix of left-field Soul and chilled out electronica.  It does have one earlier single, “Electric”, one of two duets with singer Khalid, and the new single “I Don’t Even Know Why Though”, which is fire! Check out the video for it…